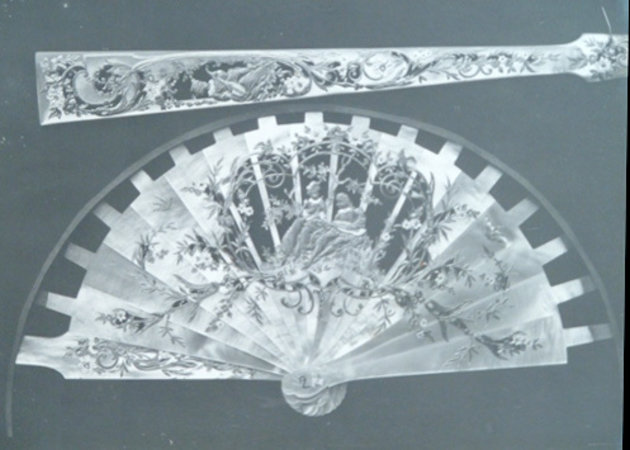 A French album with original photographs of beautifully decorative fan sticks and guards, the elements of the monture, undoubtedly intended for use by the maker or tabletier. Occasionally, numbers are written on the “tête” or head of the monture or elsewhere, suggesting that the album may be a “référencier.” By French law, the makers of the montures for fans, members of the ancient tabletiers, were independant of the feuille or mount makers. In the 19th century, this trade was practiced in the department of l’Oise, with the artisans remaining largely anonymous, while the feuille or mount makers worked principally in Paris. With this album, we see popular early revival themes interpreted on the finished sticks: themes of cherubs, romance in the garden, flowers, music, dance, and a bit of mythology. The style is often neo-rococo; occasionally, traces of Art Nouveau style can be detected. Each illustration shows the completed and designed sticks fanned out with a plain black cloth or heavy paper setting where the mount would eventually go. In each photo, one of the decorative guards is placed horizontally above the fan shape. The rivets are in place on the tête or head of the monture. On one somewhat faded example appears the signature, “ A. Cresson.” It is very rare that the monture makers would be identified. It is not possible to identify the materials used with certainty, but a recurring shimmer of light on many plates suggest nacre or mother of pearl. The traditional materials for montures included exotic woods, nacre, tortoiseshell, ivory, bone, horn (especially, Irish) and eventually, celluloid. Ways were found to imitate some of these materials as the industry progressed. “Actually, the most lavish fans date from the second half of the nineteenth century.” (www.thefanmuseum.org.uk) A historical costume ball given by the Duchesse de Berry in 1829 “started a vogue for reprises (which) continued for most of the century. Old fans were in demand, and since the supply was inadequate, especially in France, a new industry sprang up specializing in copies.” (Bennett, Anna Gray. UNFOLDING BEAUTY. THE ART OF THE FAN, p. 17) This would coincide with the great popularity of fans as the Belle Epoque dawned. See also, HISTOIRES D’EVENTAILS. Paris: Musée de l’Eventail Herve Hoguet, and Volet, Maryse. EVENTAILS EUROPEENS/ DE L’OBJET D’ART AU BREVET D’INVENTION. Genève, 1994. A rare and intriguing item. “The Woman’s Scepter” Oblong album with leaves mounted on stubs (25 x 17.5 cm); 82 ff. with 74 mounted photographs + 5 photographs loosely inserted. Decorative endpapers. The photographs measure 12 x 16.5 cm. on average.

Original red cloth, lower cover shows old damp stain which does not affect interior, cloth flecked; cloth slit in places along spine edges; head and heel of spine chipped; 4 of the plates at rear are not or were not tipped in; plate images are fresh.